I was excited to pull leeks from the metaphoric earth this week because I knew I was getting sick, and the first thing that came to mind was the soup I’m going to describe to you now. Yes, chicken soup for sickies isn’t especially ground breaking, but this one is special and has become one of our favorite comfort foods on just such occasions.

This is adapted from another of my mother-in-law’s recipes. It occurs to me that I could probably build an entire food blog just out of her cooking, though I’d worry about doing it justice! But I’ll try to, here, just in case any of you are also feeling undone by an early season yuck like I am.

Leeks are, of course, part of the allium family, along with onions and garlic. Apparently they are easy to grow from seed, but in my garden, they never got to be more than reedy looking scallions, and then, finally, gorgeous purple blooms that made the bees swoon. The sight of them, even without the delight of eating them, was almost delicious enough. 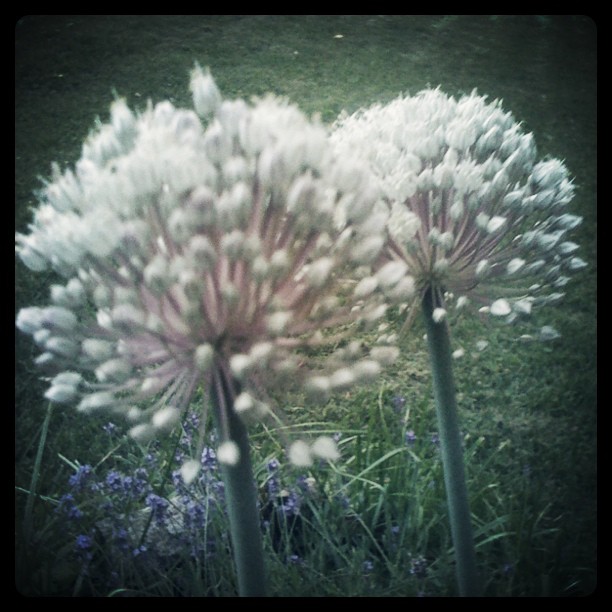 But eating them is sublime. Milder and sweeter than most onions, they seem, to me, more refined. I know I’ve said I appreciate their declarative properties, but I love equally the poetry they make when sauteed long and soft in unsalted butter or good olive oil. As in this recipe.

But like any beautiful poem, a leek begins a little roughly. You must hew and hone before it can shine. This means trimming away most of the dark green, which can be overly fibrous (but keep some of it to make a good veggie stock!), and then meticulously washing away the dirt that collects as it grows, good and long in summer, through fall and sometimes even over winter.

This is the tender part.

This is the part for compost and stock.

Dirt! And lots of it.

Take your time and pull the layers back under running water. I like to slice down the length of the stalk, making a cross-hatch pattern to let the water really get in there.

Slice up your leeks and sautee them with some sea salt in a tablespoon of unsalted butter over medium low heat in a heavy pot. Let them soften until translucent. 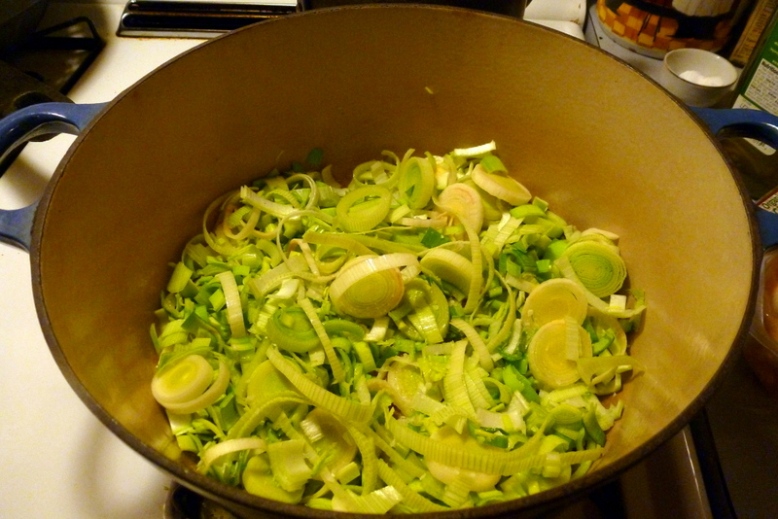 Meanwhile, rinse your chicken thighs and pat dry. Salt them generously. You can use other parts of the chicken, but I really like the bone-in, skin-on thigh for this. Yes, the dark meat is fattier than the white and the skin adds even more fat. I know! That’s the point. Fat equals flavor, people. And you are going to take the skin off before you eat the soup. But while it’s in there, it’s going to lend a richness to the broth, and the darker meat will stay moist and lovely and that is so much better than dry and ugly.

Once the leeks have cooked down, place the chicken thighs skin side down in the pan, nestled among all that green. Turn up the heat a bit. You want to get a little bit of color onto the chicken in this browning. Again, flavor. Trust me.

Flip them over after five minutes or so. They should look about like this.

Now add 4 cups of stock or water to the pan, and at least a teaspoon or possibly even more, of white pepper. This is really the magical ingredient. White pepper has a very…I don’t know, a kind of zing to it that black pepper does not. Do you like Hot & Sour soup at the Chinese takeout as much as I do? I bet it’s because of the white pepper, which is, in many recipes, the main ingredient in the “hot” part of that dish. That sinus-clearing, health-encouraging quality is exactly what I also love about both of these soups, and what I was in real need of on Sunday night as my cold encroached.

Once you have the stock in the pot, add the barley. Raise the heat so the soup boils, then turn it down again, cover and simmer about 30 minutes. It’s a little bit of a pain in the pepper to do this, but at this point, I take each of the chicken parts out of the soup, remove the skin, shred the meat and then put it back in the pot. It’s worth it, though, and shredding meat with two forks is kind of soothing if you’re not too terribly hungry.

One of the nice things about this dish is that you can make it very thick like a stew, or loosen it with a little more stock or water for a truer soup. Either way, serve it very hot with very good multi-grain sourdough bread to dunk.

Then make yourself a hot toddy and go to bed.

What’s your go-to meal when you’re feeling under the weather?