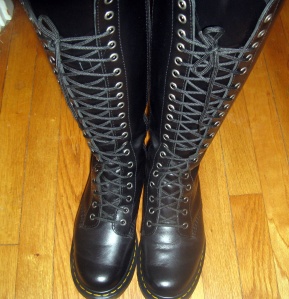 Allow me to introduce you to my new, old loves. I have had a crush on knee-high, lace-up Doc Martens boots since I was a teenager. It was mostly a secret, unrequited longing, however. I was not a particularly edgy youth. I certainly wouldn’t have qualified as punk.  I was a “good girl.” I kept curfew. I cleaned my room. My mother used to say she wished she had ten of me.

She didn’t know back then about the four packs of Bartles & Jaymes wine coolers I would drink with Sue McNeil in the back of our friend Frank’s red T-1000, listening to Def Leppard’s Pyromania on cassette. What a  rebel.

"Thank you for your support."

So, yeah. I probably would have looked a little ridiculous wearing these awesome icons of angst back then. I did eventually get a pair of the classic oxfords in cool funky green, but that was after I had already gotten a divorce. And a tattoo.  And become, apparently, a walking cliche.

And now, here I am, twenty years later, struggling happily to pull the laces through 20 eyes, marveling at how comfy they are, imagining how they will look with the black and blue babydoll dress I just picked up at Goodwill, and wondering if I will actually be brave enough to wear them into the classroom.

And, honestly, also worrying that I have just walked into the Next Great Cliche: Mother at Midlife, trying to hold on to youth, to a hipness she never really had.

Do I look silly? Maybe. But here’s another question: do I care?

I don’t think I do.  Maybe a little silly is exactly what I need as a 40 year old mother of young kids.  Maybe it’s what I need to keep my spirits up in this awful job market. In the face of all the rotten crap going on in the world.

Or maybe, instead, I’m just a little bit fierce here in my 40s. Maybe I earned these kick ass boots and it’s only now that I’ve lived through my 20s and 30s that I have the experience and attitude needed to wear them–to “rock them,” as my friend Carla says.

Yep. Silly and fierce. That’s me. 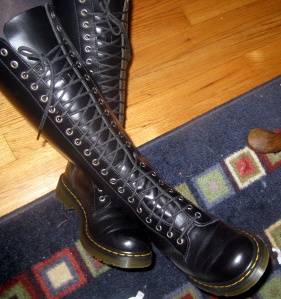 One thought on “London Calling”