In my last post, I was musing a little on how the death of Joe Paterno led me to think about my own grandmother’s death. In between now and then, I have been up to my neck in the process of applying for a job–the job I am crossing my fingers so hard about–and have not found the time to do any writing or even musing of my own. I’ve already been through (and aced!) the phone interview, and have now completed the written portion of the application: 8 essay-like questions about my experience with development and program management. I am so grateful to have had a full two weeks to work on this, and took almost the full allotment of time to do so. I finished them up on Saturday, and now find myself adrift, wondering if I will make it to the next round of interviews. I hope so. This opportunity would change my professional and family life in ways that I find really exciting to imagine.

In the midst of this exciting, blossoming life opportunity, I count two more deaths. “It comes in threes,” my former mother-in-law would always caution whenever anyone in her immediate or distant vicinity died. She counted anyone: celebrities, politicians, family members. Just count them up. Always three.

For me, today, this accounting includes the death of Penn State’s MFA program, being mourned this week all over Facebook and Twitter and then finally announced on the English department website:

The English Department regretfully announces that beginning with the Fall 2012 admission cycle, it is no longer accepting applications for its MFA program.  We are unable to provide funding for newly admitted students; therefore, the MFA faculty has decided not to recruit any new students.

My program. The one which granted my degree ten years ago, and the one for which I served as associate director for eight years. The trouble all began last year at this time, of course, and we were lucky that there was a last-minute save in April. My position did not survive, but the program looked like it would…at least in some iteration. I feel very sad to see this thing fold. There is much discussion–some of it quite heated–around the blogosphere about what is seen by some as a glut of CW programs, too many hopeful, naive MFA grads on the terrible job market, and just a general questioning about the intrinsic value of these programs overall.

For me, personally, the answer to the question of value is simple: my MFA afforded me three years of time to focus on the thing I love most: writing. That in itself was enormously valuable. Priceless. I always viewed it as an apprenticeship, and was wholly grateful to have that time fully-funded and attached to comprehensive health care benefits.  My experience was more than valuable. It was life-changing. I learned (yes, you *can* learn in an MFA program!) how to engage challenging, seemingly oppositional aesthetics and harness those lessons in my own poems. (I mostly wrote poems as a student; my nonfiction writing came later, though it should be said that from the one memoir workshop I took as a grad student, my entire nonfiction writing identity was born. That’s some amazing value right there!) I learned how to be a thoughtful member of an intellectual community, and by that I don’t mean that I learned how to be snooty or snobbish or to speak only in grad school jargon. I mean that I learned how to ask questions about ideas that mattered to me and others, and to listen to answers that seemed surprising or brilliant or wrong-headed or facetious or dumb or so smart that I thought it would break my brain to think about them five seconds longer. I learned how to cull from discussions with peers and professors my own ideas, my own artistic positions. In this way, I began to find my own poetic voice.

This is good life stuff, people. It’s not just about making art.

Yes, surely you can do this outside of academia, outside of an MFA program, but for me, it happened at Penn State. In the seminar room of 21 Burrowes. In the grad student cubicle ghetto of room 53. At Zenos over a pitcher(s) after workshop. In Foster auditorium, listening to Charles Simic and Charles Wright and Lydia Davis and Ellen Bryan Voight and Catie Rosemurgy and Jane Hirshfield and Amiri Baraka and, and, and, and.

I met some of my best friends during my MFA, and created lasting professional connections during my time as the associate director. The people who had been my professors and mentors became colleagues (and remained mentors) and friends. I think of them especially now with tenderness, because I know how hard they fought to keep this program afloat. I watched this demise unfold slowly over a span of years and those people fought. Hard. They are exceptional teachers and while they will continue to bring their talents to bear with the undergraduate students at Penn State, it is a complete shame and a huge loss to graduate learning that their connection with graduate-level creative writing has been severed.

The other death is as far from institutional as can be. Poet Morgan Lucas Schuldt passed away last week after complications from Cystic Fibrosis. As a poet and editor, Morgan was in my professional acquaintance, but my connection to him was not professional. He was the best friend of one of my oldest, closest friends. A man who loved him so much that he and his wife named their son after him. The grief there is staggering, stupefying. I ache from a distance for my friend and for all of Morgan’s family and circle of beloveds, which is enormous.

I only met him once in person–at a conference– and remember him as spunky (baseball-capped and cute as hell) and friendly and, wow, smart. I know he was all of those things and more, but I am going to leave the real eulogizing to those who knew him far better than I. He did a lot for poetry and for poets, and as far as I can tell, did so for the simple love of language and connection.

The world will miss you, Morgan. 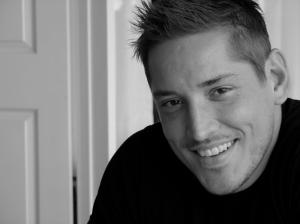 Some of Morgan’s poetry.

An interview with Morgan about his journal, CUE.

Make a donation to the Cystic Fibrosis Foundation

*This post also appears on We Who Are About To Die, in a slightly different version.

3 thoughts on “It Comes in Threes”