Here they are. My husband’s mortal enemies.

I don’t understand what he’s so afraid of. Look how cheerful!

Okay, that’s not true. I do know, because he has no problem telling me that his hatred of zucchini comes from its “overwhelming grossness.” When I ask, “Are you talking about taste or texture?” he says, “Yes.”

So I have pretty much given up trying to convince him otherwise. It’s just not worth it when there are so many other nice veggies he will eat happily. But I admit that I miss seeing more of this tender and delicate (as long as it’s picked young, anyway!), delicious squash on my plate during the summer. So I’d like to thank Jess and the hand of fate for forcing us together in the kitchen. The results, I am pleased to say, were nothing short of delightful!

You’ll notice in the picture above that I chose some classic green zukes and also some yellow ones. Are the yellow ones actually called zucchini? I found some sites that referred to them as “straight-necked squash,” and some that called them “golden zucchini,” but all of them said they could be used interchangeably in recipes, so I’m going with an answer of yes, they are the same for our purposes here. Plus, they are pretty and pretty food just tastes better. (This is so totally not true, just ask beef stew, roasted kale chips, split pea soup and other ugly-but-delicious foods.)

My husband is not the only zucchini-hater I know. I know kind of a lot of them, most of whom point to the texture and say things like, “mushy,” and “slimy,” and “ewww.” They have a point, but to my mind, it’s the same point anyone who has been subjected to poorly, overly-cooked vegetables rightly makes, and it’s one that can rather easily be unmade given the tools for proper preparation.

In the case of our beautiful courgette here, the way to retain some textural integrity (if that’s your plan, and it might not be; I’ll address that later in the post), is to cook it very quickly over fairly high heat, in a bit of oil or butter, having salted it slightly to bring out some of the moisture.

Cut the zucchini into coin shapes and heat a nonstick pan over medium high heat. Add 1/2 tsp of olive oil, then arrange them in a single layer, being careful not to crowd them. Sprinkle some coarse salt and some fresh thyme leaves on top. (dried herbs–oregano, basil, parsley–would also be nice.) Cook them for only two minutes, then flip them over for another minute or so. They should have this nice bubbly-browned look to them.

When my kids were really little I read a (very good) book about feeding them that admonished me not to make meals that were “sadistic.” In other words, don’t put down a spread of only super-challenging-if-nutritious foods, none of which there would be a chance in hell they would touch. For my husband, this would be a meal that consisted of nothing but crab, mushrooms and zucchini. So you’ll notice that there is nothing except for zucchini in the pan above. That’s because I cooked the squash separately from the rest of the ingredients so he could also take part in the meal.

(This, by the way, would be called “short-order cooking” in that book about feeding toddlers, and I would be admonished for doing that as well. Sorry, book.) 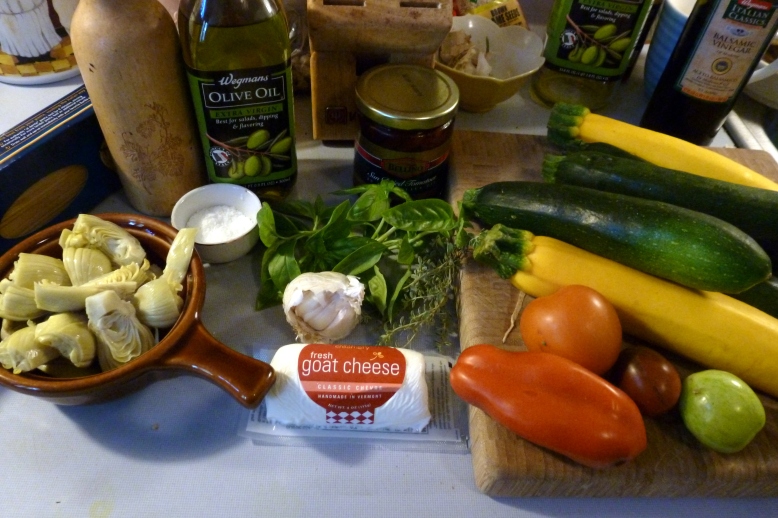 2 small zucchini or yellow summer squash (the smaller they are, the more tender and less bitter they are) cut into coins

1/2 can quartered artichoke hearts in brine

First, slice your zucchini into coins (leave the skin on) and prepare them as above. 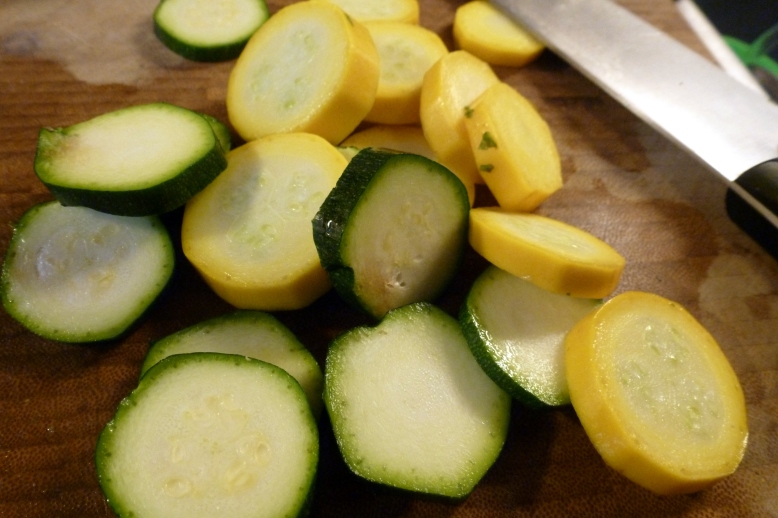 Put your pasta water on to boil. Lots of water. Salt it generously. Really, don’t be shy! Couple of tablespoons. Nothing worse than unsalted pasta, just ask my kids about the time I forgot to salt the cooking water. “Deeeesgusting, mama!” Whoops.

Heat a large saute pan over medium high heat and add 2 tablespoons of olive oil. Add the fresh tomatoes and garlic and sprinkle with some salt. 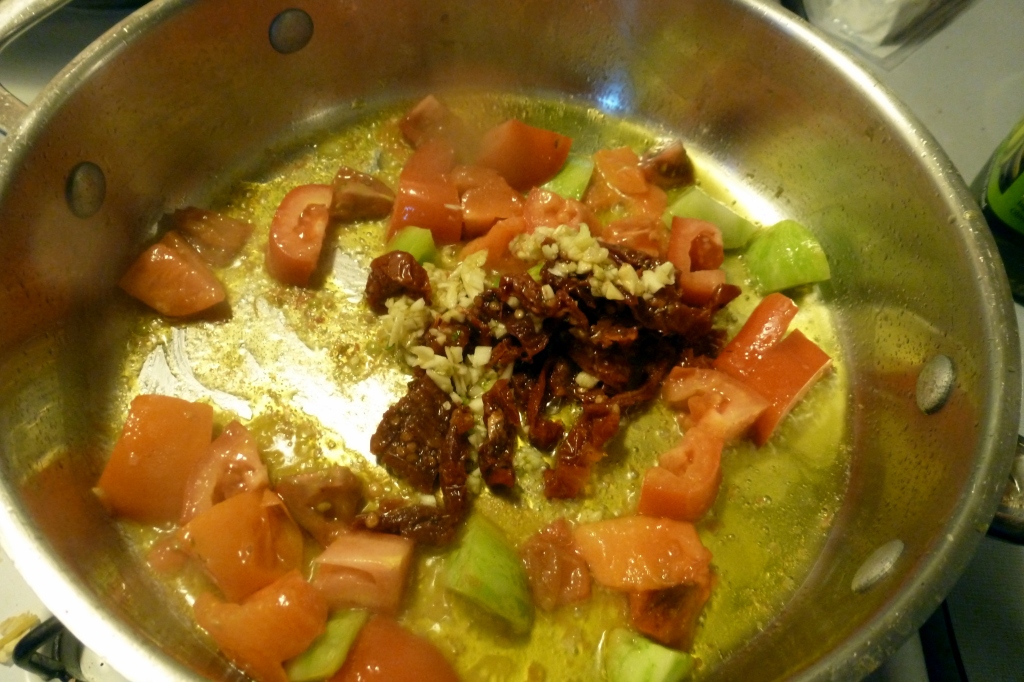 I must have snapped this pre-artichoke.

At this point, if you want or need a saucier sauce, you can add the reserved pasta- cooking water. This is something I learned from watching hours on end of Molto Mario. Something about the starch that has leached out into the water creates a creaminess when added to a sauce that’s on the dry side. Everything just hangs together better than if you were to use water from the tap.

Let all this good stuff cook down a little and then add the sun-dried tomatoes and artichokes. You want a nice contrast between the softer fresh tomatoes and the more toothsome dried ones. Add the balsamic vinegar, which is one of my favorite tricks for brightening up tomato-based sauces and works especially well with the earthy-sweet sun-dried tomatoes. Boy those things are tasty!

Plate your pasta and ladle some sauce over top. Don’t drown it, please! I added the zucchini back after the sauce, but you could also mix it in with the rest of the sauce at this point. Add a dollop or so of goat cheese and tear some basil leaves on top of that. Grind some black pepper. Mix it together while the pasta’s still hot–the goat cheese will melt all over everything and you will enter an ecstatic moment.

This is a recipe wherein zucchini is, admittedly, not the star. You could leave it out and the sauce would still be excellent. (My husband loved his.)

But I like the contrast between the zukes and the chokes and the ‘maters. (I also like saying “zukes and chokes and ‘maters.”) And I like the nutty-sweet flavor, the earthiness the zucchini offers here, too. It’s a wonderful supporting player in a fabulous ensemble cast!

In the next post, I’ll offer two more recipes that sit on the far ends of zucchini’s textural spectrum. Besides being delicious, it’s a damn versatile veggie, this is for sure.

Do you “short-order cook” cook for your family? What is the one meal everyone can agree upon in your repertoire?