I can’t think about beets without remembering the Gilligan’s Island episode where the radioactive seeds wash into the lagoon, and the resulting vegetables wreak havoc on the castaways. Mrs. Howell eats the sugarbeets and, if I remember correctly, cleans everything on the island in a burst of super-charged energy.

Before you run out to the local produce aisle to pick up a crate or two in preparation of your mother-in-law’s visit, though, let’s be clear that sugarbeets are not usually a comestible crop. Rather, they are grown and harvested for their sucrose content, and are then processed into table sugar. Beetroot, which is the thing we mean when we talk about the things we eat, has 9 grams of sugar per serving, so I feel safe saying that my house, at least, will likely remain filthy.

But at least my guests will be well-fed!

Speaking of mothers-in-law, mine is wonderful cook, and a love of good food and cooking has been something we’ve shared since I met her ten years ago, when she traveled to PA to meet her son’s new girlfriend. She brought me lemons from her garden in Southern California, and we stood in my tiny apartment kitchen, preparing that night’s dinner together. We’ve prepped many meals like that since that first night, and she has given me some of my favorite, now-staple recipes and my French Blue Le Creuset dutch oven, most beloved of pots. She’s also stocked my cookbook shelf with titles I go back to constantly (Mark Bittman, I love you.).

Last Christmas, she gave me the book I turned to for this week’s featured ingredient: The Flavor Thesaurus, by Niki Segnit.  It’s not a cookbook, per se, though it does offer a smattering of recipes. No, it functions the way a thesaurus does, by grouping related flavors and suggesting harmonious, often surprising pairings. There’s science at work here, but I won’t get into that, as it’s really the spirit of experiment and the cheeky personality behind the prose that I am drawn to. She talks skeptically, for instance, about the pairing of beet with chocolate, describing her attempt at a beet-infused cake this way:

In chocolate beet cake, the cocoa almost entirely overwhelms the beet flavor, leaving nothing but a hint of its earthiness, which makes the cake taste like a cheap chocolate cake that’s been dropped in a flowerbed. And the raw cake mixture was so unpleasant that no one wanted to scrape the bowl clean. Case closed, at least in my kitchen.

Among the other flavors she identifies as harmonious with beets is cumin, and in that entry, suggests that the two can create a complex soup, into which one might stir some creme fraiche or sour cream. And that’s where she stops– fully immersed in imagination, just short of actual recipe.

I’m game. Are you? Great! Then let’s first cook up some beets.

This, Charlie, is the easiest, least messy way to cook them. You are going to have to embrace a little mess, I’m afraid, and also quit rushing about. Beets require patience. Why not set yourself the task of writing a poem while you wait? 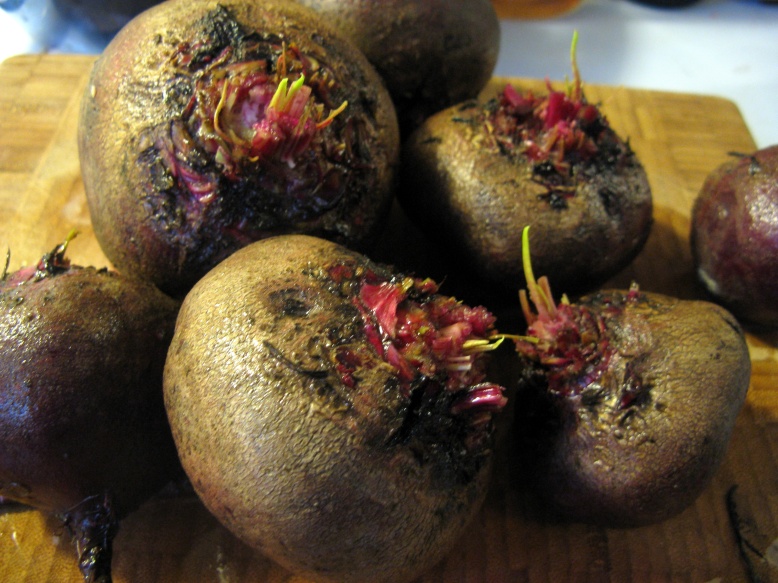 First of all, this what fresh beets look like, albeit, without their leafy greens attached. That’s my fault for forgetting to snap a photo, but we’ll come back to the greens in another recipe. You all know how much I hate wasting food.

Wash them well (they come from the ground, after all) but don’t peel them! I’ve done this and looked like an axe-murderer at the end of it. But if you cook them in their skins, the gore-factor goes down considerably.

Heat your oven to 375 and grab some aluminum foil. Put two or three beets (depending on size) onto a sheet of foil and drizzle some olive oil over top. Seal them up into little packets. Pop them into the oven.

Check them after, say 30 minutes, but don’t get your hopes up. Mine were not that big and even the smallest ones took about 75 minutes to cook through. You should be able to pierce them with a knife that will come out red red red.

Once they’re cooked, let them cool until you can handle them comfortably. Now it’s time to peel them. I do this under running water to wash away DNA evidence. You can use a paring knife, but really at this point, the skins are so soft and loose that they pretty much come away with just a gentle nudge of your fingers. 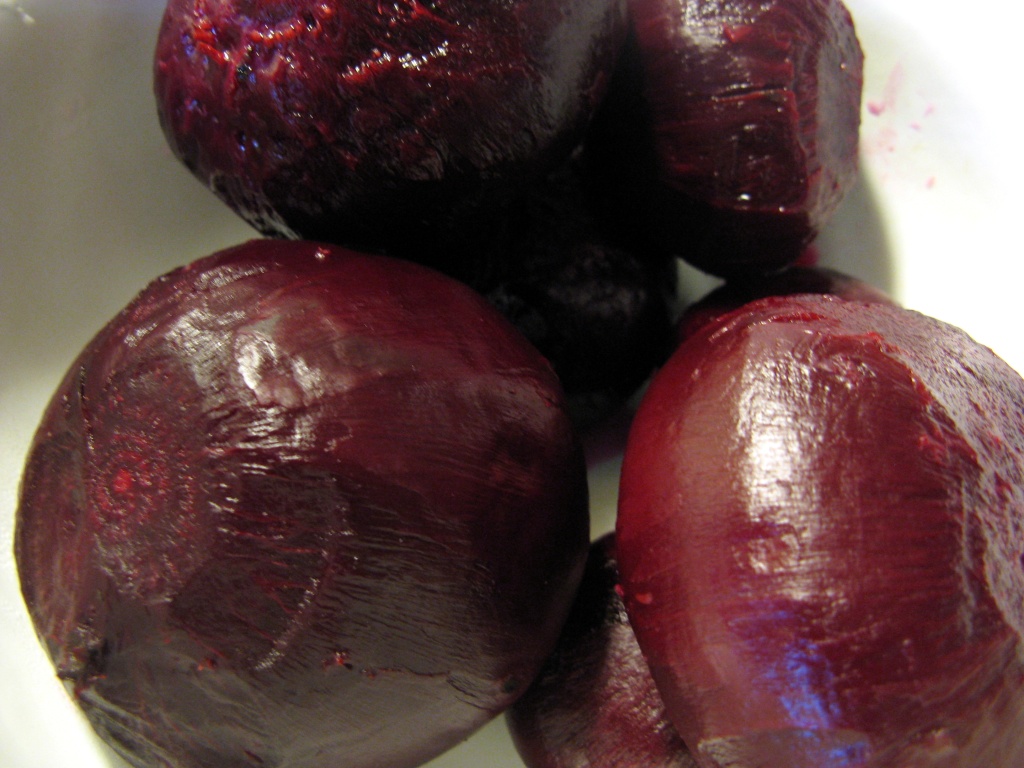 Naked beets. Scandalous but so very pretty in a white porcelain bowl.

Now you have the base for a bunch of lovely recipes. Here comes one now! 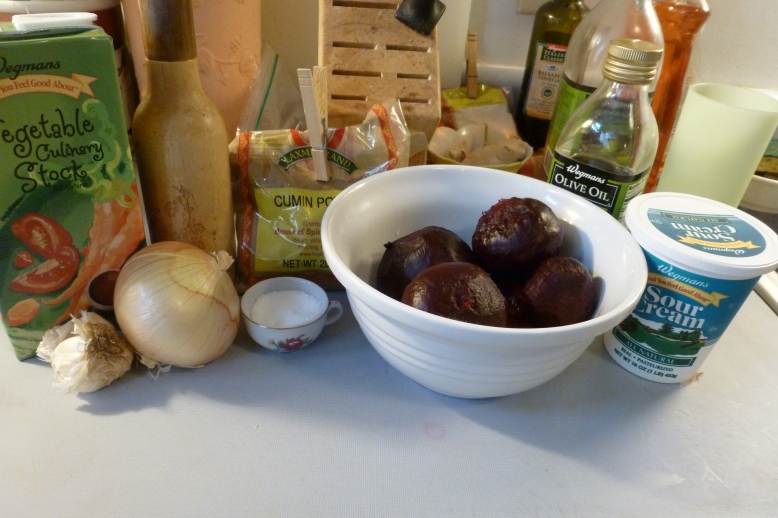 Heat a heavy stock pot over medium heat. Add olive oil. Add onions and sprinkle with salt. Cook for a bit until they start to soften. Add garlic, beets and cumin. Stir to coat, being careful not to burn the cumin. Add stock and bring to a boil. Reduce heat and simmer for twenty minutes or until onions are completely soft. Remove from heat. 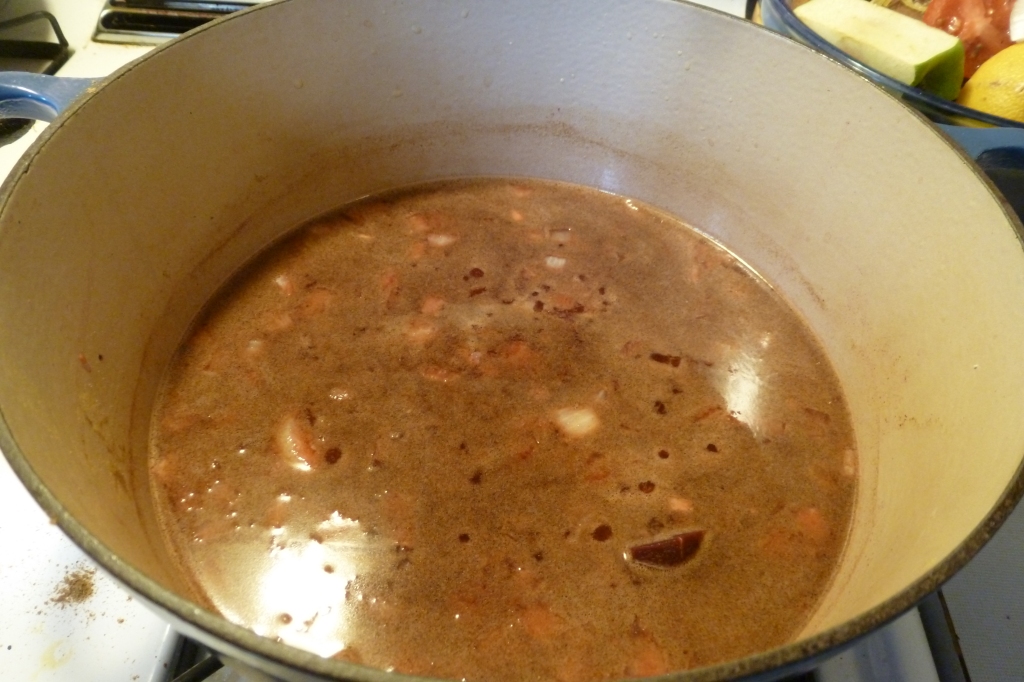 Not especially lovely yet.

Now, be careful, because I want you to puree this concoction and hot liquid plus whirring blender equals possible scalding. You could, of course, wait until it cools. That would be quite sane. But if you don’t have time for that, just do this in batches, taking care to keep a towel on top of the blender to protect your skin from any random splashings. Pour it back into the pot.

Your other option is to opt not to puree it at all. But I think the result is fairly spectacular visually if you do: 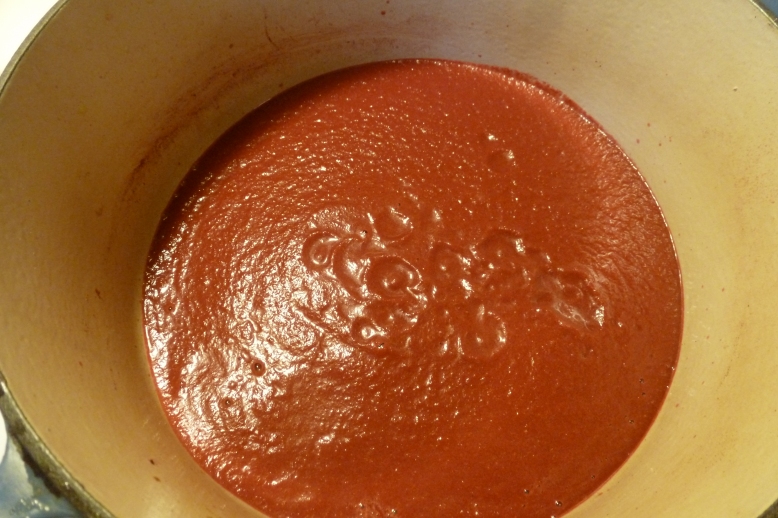 You’ll have to trust me that this is the deepest, most ridiculously magenta-colored food not filled with chemical dyes that you’ve ever seen. Stunning.

Season to taste with salt and pepper. I stirred the sour cream in and ladled it into pretty yellow bowls for me and Paul. 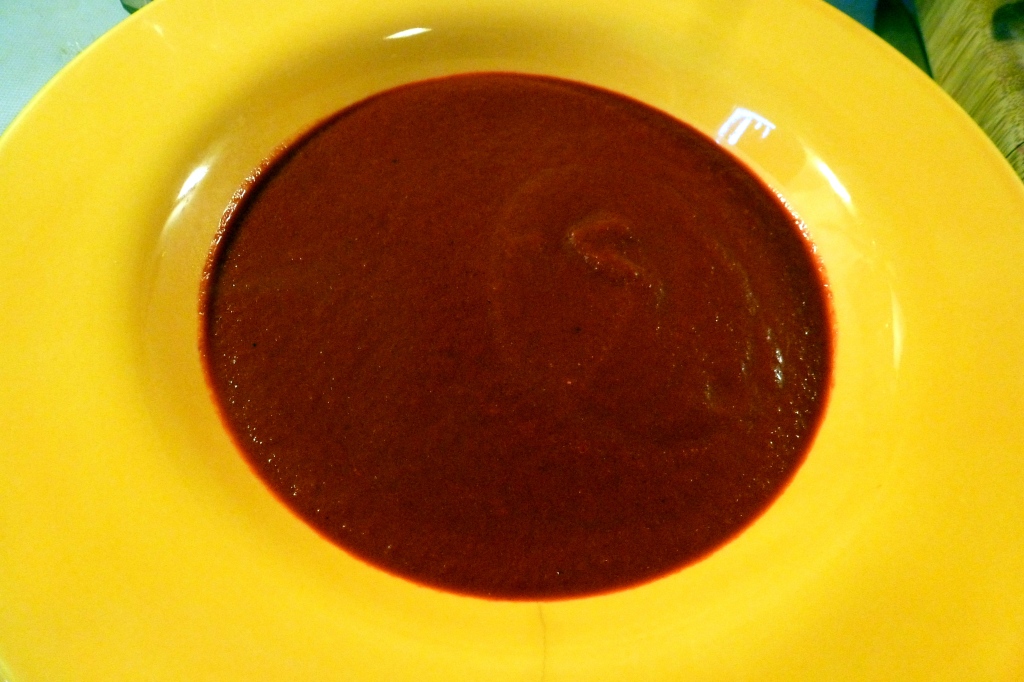 How did it taste? Earthy! Fruity! And yes, complex. Cumin is one of my favorite spices, and I think Segnit was right to pair it with beets. I do think I may have had a too-heavy hand with it though, so perhaps you’ll want to decrease my suggested amount slightly? The sour cream is a wonderful, balancing addition, and I’m thinking next time I might float some toasted walnuts on top, too, mostly for texture.

Do you tend to follow recipes to the letter or are you comfy making things up as you go?

3 thoughts on “Warm Beet Soup with Cumin and Sour Cream”