When my son was two years old, and I was four months pregnant with my daughter, Paul and I traveled to Europe with his parents for a three week tour of their native Germany. It happened that our timing had us arrive right in the middle of something called Spargelfest–a yearly festival celebrating the much-anticipated harvest of the prized white asparagus.

Now, I happen to love asparagus. Truly, it’s one of my favorite veggies. However, and I mean no disrespect to the Germans (whom I also love, and even more than asparagus) nor to their various culinary delights (some of which I love, others, well…Hey! Look at that shiny thing in the sky over there!), the preferred method of cooking said veggie seemed to be Boil it Until Paste Then Drown it In Hollandaise.

But why am I blathering on about asparagus when we all know I am supposed to be talking about kale? It’s because of the Germans! Listen, I may not have loved all that slimy white spargel, but I do love very much that they revere it so much to have dedicated an entire festival to it! Which brings us to kale, because, huzzah! the Germans also festivate around this dark, leafy, super-nutritious member of the (headless) cabbage family!

The Scots, too, venerate these greens so much so that in certain dialects, the very word “kale” means “food,” and the saying, “to be off one’s kale,” means to be too sick to eat.  How’s that for metaphor? How’s that for deep, truest love?

And I do love kale. I am a friend of bitter greens in general, so I was thrilled to be tasked with spending some extra time with this particular food, and then further thrilled to share my findings (sounds so very scientific. It’s not, I promise!) with you. Sharon gave me some pretty specific dietary parameters within which to work, including needing recipes that are mostly vegetarian,and that contain no tree-nuts or lactose. She was also candid about what she didn’t want: no stews, no pasta or stir-fry dishes, please.  Okay! This just makes my job easier, people. Specifics rule.

I knew right away that I wanted to talk about one particular recipe that is a kind of treasure in our house, but I also knew I wanted to offer more than one. Variety, the spice of life and all. (The Germans also have a saying that I like: “Hunger is the best spice.” When my niece was about eight years old, she visited me in PA and we were preparing to meet Paul for lunch. He was late or we were and she was cranky and hungry. I think I must have said this to her and she all but bit my head off: “No it’s NOT, Aunt Sheila.” Okay, kiddo. Let’s get some food into you pronto.)

So, one recipe today, and one (I’m such a tease! How else can I keep you coming back?) on Thursday!

The first thing I need to do is refute what you might have heard: no, these do not taste “exactly like potato chips!” Please. How could they? Kale is bitter and leafy and dark and chewy and potatoes are potatoes. For the love of Holy White Spargel, people, it’s like when those Atkins Diet folks tried to convince everyone that mashed cauliflower tasted “just like mashed potatoes.” No, it did not. It tasted like mashed cauliflower, which has its very own charms and delights! I’m all for simile-making, as you know, but why can’t we just learn to appreciate foods on their own merits? That is what I want you to do with this roasted kale, which, while not a potato chip, IS a delightfully crunchy, salty (if you like), snacky, wholly addictive thing to put in your mouth. And if you have a surfeit of green in your garden or your CSA box, this is a great way to make good use of it quickly.

2. Wash kale well (you know you absolutely have to wash your greens, right? E-coli is no joke.)  and remove the center ribs. Tear into bite-sized pieces. Place into a bowl.

3. Drizzle a teaspoon or so of olive oil into the bowl. Toss with your (clean!) hands until all the leaves glisten happily. 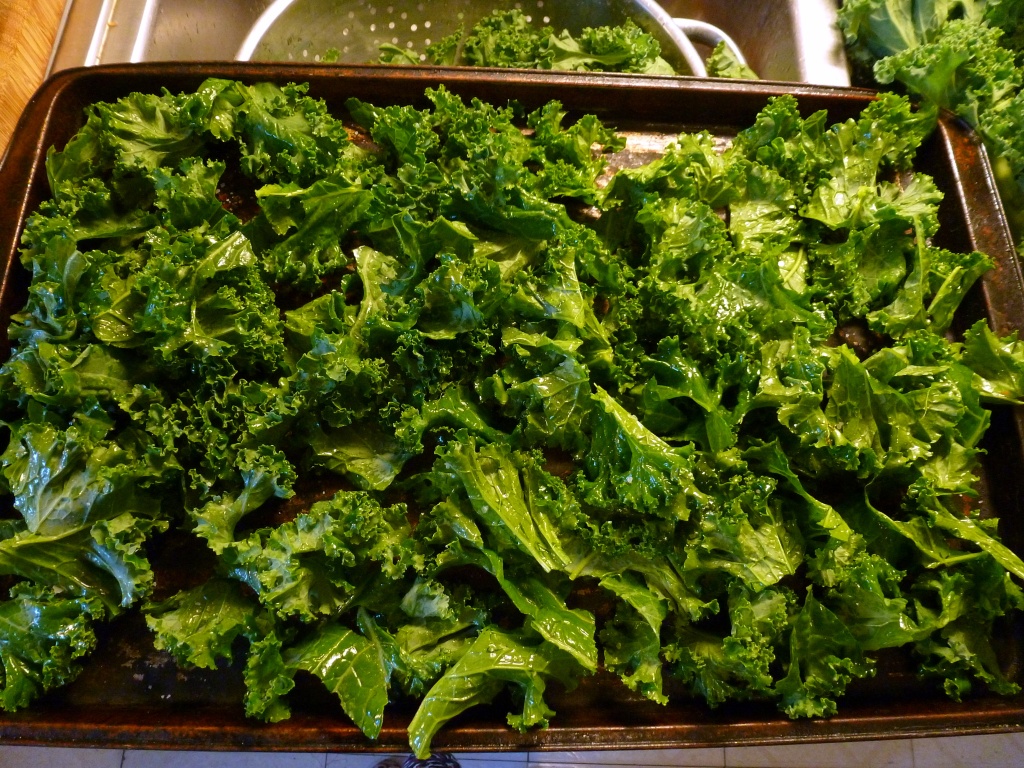 Looks crowded, but they shrink appreciably during cooking.

5. Sprinkle them with coarse sea salt.

6. Roast for about 30 minutes, depending on your oven, until the edges are all brownish-dark and crispy. Check them every so often to make sure they don’t burn, but really, the more done the better, because who wants a chewy chip?

I know it doesn’t look glamorous, but trust me.

7. Depending on your need for salt, you could throw some more on there now, while the chippies are still hot, but taste them first!

Ready for movie-watching! Who needs popcorn?

8. Call your veggie-loving kid in to prove to the internets that a) kids do eat veggies and b) kale chips are super delicious.

He didn’t think I saw him sneak that first bite…

I will have to follow him around with a broom after this, kale crumbling from each bite like so much….kale from a boy’s mouth. Similes, see?

So, my thanks to Sharon for kicking this project off!. Come back on Thursday for a second installment in the Kale Chronicles (goofy, goofy) when I will also pick the next random entry from the comments (hint, add some more here!) for next week’s Food You Don’t Know What to Do With!

In the meantime, I hope everyone stays “on your kale!”