This one’s my homage to one of Paul’s favorites, French Onion. I’ve never made a proper French Onion soup before, and don’t even have the requisite stoneware crocks in which one must absolutely serve it. Well, I do have one:

Classic. It’s even called an “Onion Soup Crock.” You can get it at Crate & Barrel, apparently, but mine came filled with borscht this summer from a friend who works at a local restaurant. I think he swiped it but I’m not sure.

Anyway, once I get another classic crock, perhaps I’ll make a proper French Onion Soup. Until then, I’ll remain a fraud in both recipe and receptacle. 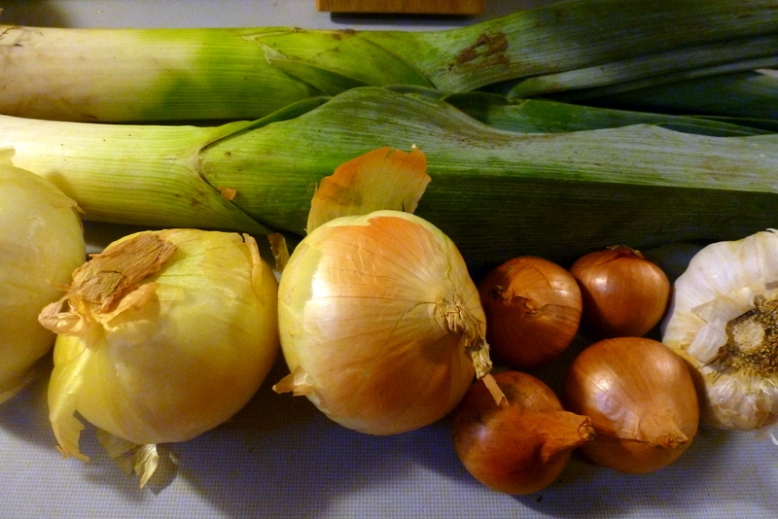 a bunch of fresh thyme

I guess I could really have called this Four Allium Soup, since garlic and onions are all part of that genus of flowering plants. But would you want to eat something called Allium Soup? I just don’t know. 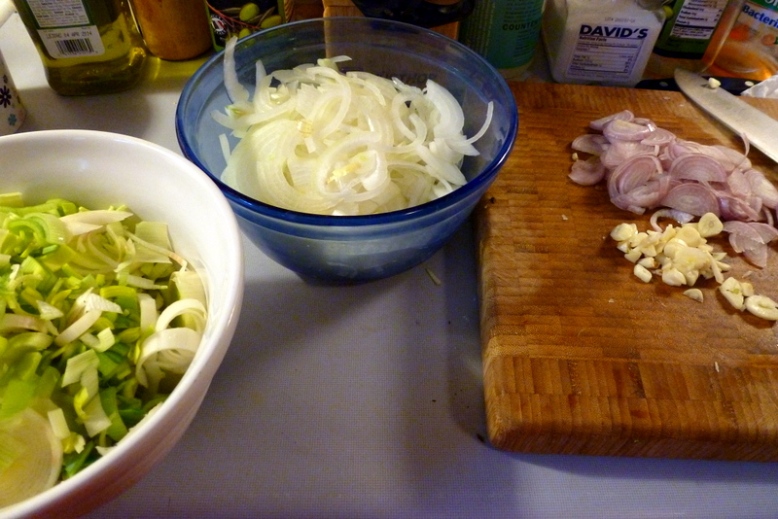 I do know that making this soup with three different onion varieties (plus garlic!) was a good idea. And I like the idea of all those cousins (siblings? I’m sick so metaphor-making is kind of clunky today.) playing together in the pot.

Whatever we’re calling them, slice them up thinly and get them ready for the pot, which you should have blessed with all that lovely butter by now. Salt them. Keep the heat at medium and stir regularly as the onions start to soften and cook down. 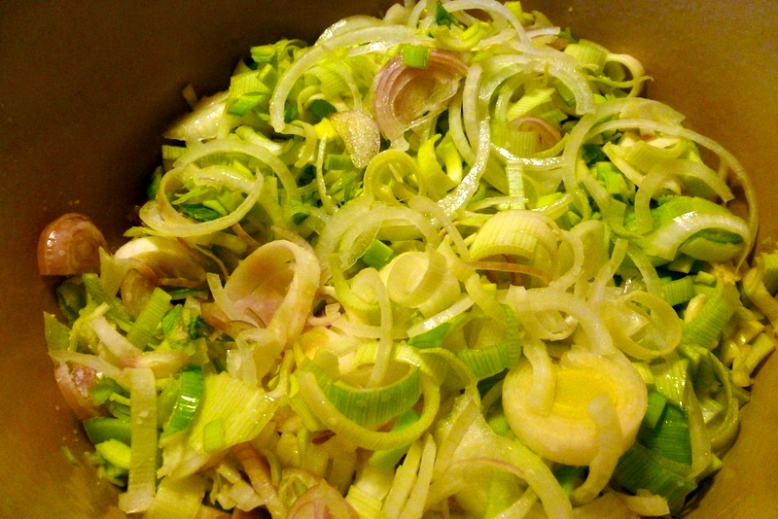 Once that happens, you are looking for them to deepen in color. This is going to take a while–maybe even as long as 45 minutes, so don’t rush it. Add the thyme at this point, too. A few sprigs, stripped of their leaves. Maybe 1 tablespoon? Maybe a little more. I really like thyme.

This is a lousy image in terms of color, but you can see how much they reduce in volume, and maybe get a sense of the browning, yes? Rule of thumb that works for me: once you get to the point where you think they’re brown enough, cook them for ten minutes longer and you’re there.

Sprinkle on the flour and cook for another minute or so. Now add the wine. 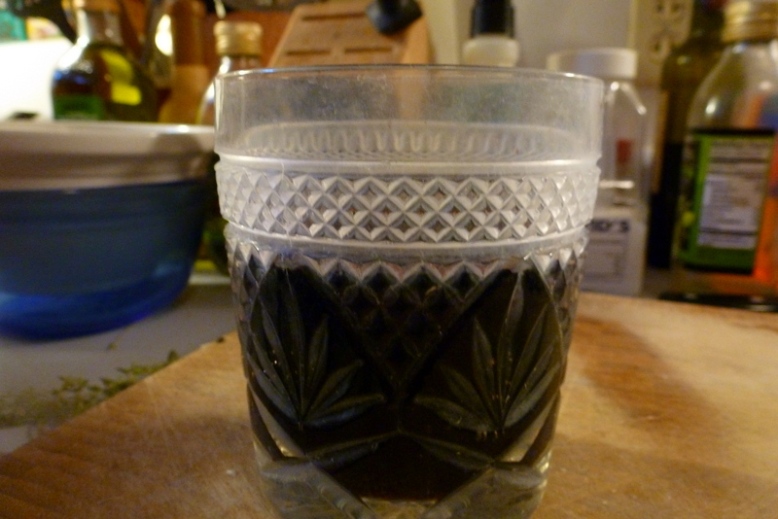 About this much. Maybe drink the first inch, just to make sure it’s tasty. (it was.)

Let the wine reduce a bit. 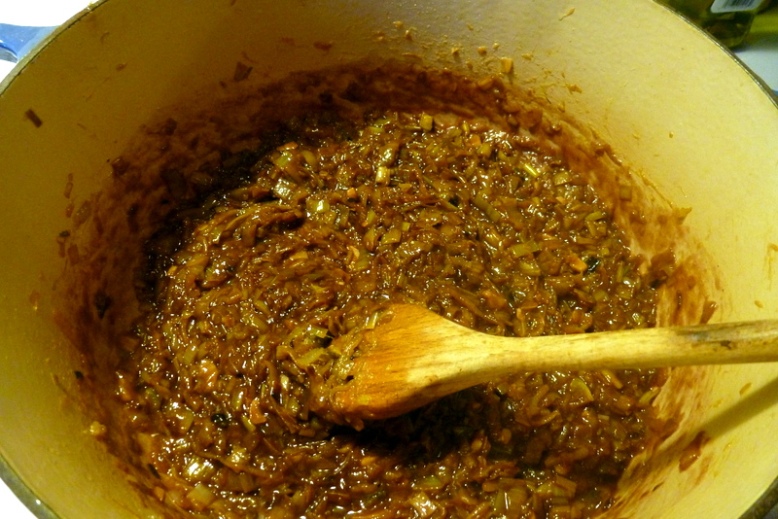 It’s not especially pretty, but the aroma will leave the house, waft to wherever in the world your ex-lovers live, and call them back to you. You might want to lock the doors at this point.

Now add the beef stock. Bring up to a boil, then lower to a simmer. Add some black pepper and more salt if you need it. (taste, first and taste again later.) Cook for about 1/2 hour, stirring occasionally. The flour will give the soup some body, but it won’t be stew-like.

Meanwhile, prepare your toasts. Slice baguettes on the diagonal, about 1 inch thick. Drizzle some olive oil, salt and pepper on each side of the bread. Place on a broiler pan and toast one side until golden, about a minute, maybe less. Watch carefully so they don’t burn. Then take them out and turn them over so the toasted side is down. Sprinkle a good amount of cheese on top of each toast and pop it back under the broiler for another minute or less. 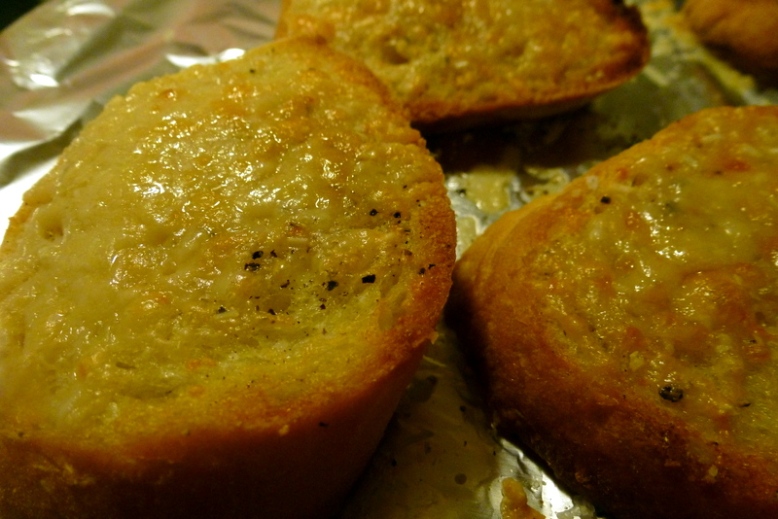 To serve, I put one toast at the bottom of the bowl, ladled the hot soup over it, then floated a second toast on top. 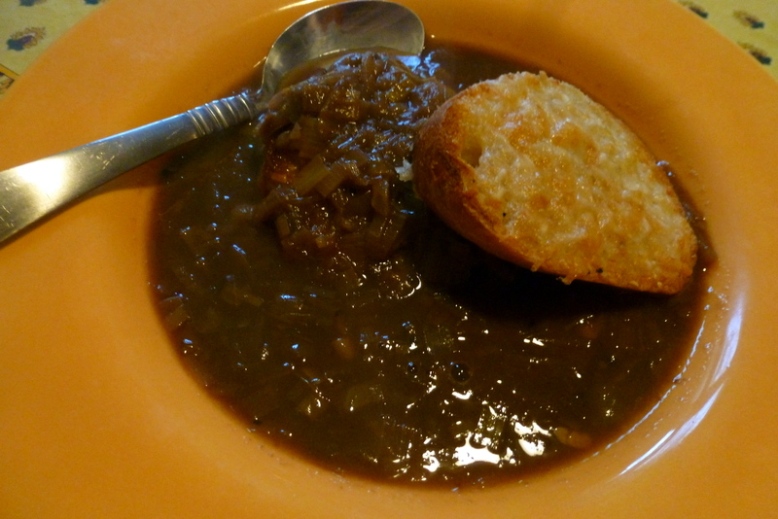 Paul, my royal taster, proclaimed this, “Fancy!” and “French-ish.” We thought it tasted like a close relative of the much fussier, extra-cheesier, perhaps slightly more eloquent and traditional French Onion Soup. It most certainly tasted good. Excellent, even. Something I would definitely want to eat again, no matter what it was called.

Are you a culinary purist? How comfortable are you with re-making classic recipes?